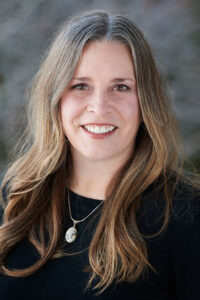 “U.S. foreign policy is stronger if it can represent the voices and the interests of all Americans,” says Dr. Carrie Booth Walling, professor of political science and faculty director of the Gerald R. Ford Institute for Leadership in Public Policy and Service at Albion College.

This spring, Walling was invited to serve on a task force on city and state diplomacy by the Truman Center for National Policy. The task force was led by Truman Center officials, mayors, a U.S. Senator, a U.S. Representative and the Michigan Secretary of State. Their efforts resulted in a recommendation detailed in a newly released report, “Broadening Diplomatic Engagement Across America.” “What we are proposing is the creation of an office of city and state diplomacy that would be located in the U.S. State Department,” Walling says.

The proposed office would connect and coordinate with local governments to help build their capacity for diplomacy. Walling says, “Foreign ministries around the world support subnational diplomacy by assigning personnel to local communities and offering significant funding to boost international engagement. We don’t have that structure here in the United States.” This recommendation, she says, seeks to change that.

Engaging in global diplomacy is crucial, Walling says, to effectively run the country. “What makes diplomacy so important is that we face challenges that no one country can solve by itself,” she says. “The United States, even with all of its power and influence, has a lot of problems that don’t just stop at borders.” She adds, “We can’t solve a climate crisis by ourselves, we can’t solve a pandemic by ourselves, we can’t address the crises around immigration and refugees on our own.”

“These are challenges that cross borders, that affect many countries,” Walling continues. “We need to solve them collectively. Our mayors and governors are first responders to these national security priorities and have lessons to share with their counterparts overseas experiencing similar challenges. Collaboration on foreign policy has to begin at home.”

The proposed office could have significant real-world consequences. “Diplomacy matters because there are few alternatives other than conflict,” Walling says. “The more we invest in diplomacy, the less that we need to use our military.”

On the task force, Walling provided the Midwestern small-town perspective, ensuring that places like the City of Albion weren’t overlooked. “U.S. foreign policy should reflect the interests of all Americans, and that means foreign policy and ideas and expertise and knowledge should come from all corners of the country,” she says.

Walling’s work at Albion ties in seamlessly with her efforts on the task force. Currently, part of that work is leading the College’s preparation to host an international human rights conference in May 2023.

“I teach international politics,” she says, “So part of why I think every student should take Intro to International Politics is that we live in this increasingly globalized world, and students need to understand this international system. I think, as citizens, part of understanding how our government works means also understanding our role in the world, how we interact with other countries and other governments.”

She adds, “So thinking about the ways the local, the national and the global are interconnected is central to what we do at the Ford Institute.”