Investments in campus and community infrastructure, financial and enrollment growth signal a bright future for the College. 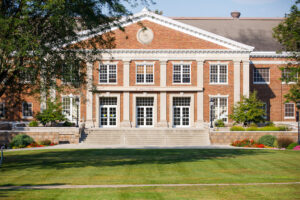 As part of a weekend of celebrations, the Inauguration of Dr. Mathew B. Johnson as the 17th president of Albion College will take place on the steps of the Kresge Gymnasium on Saturday, September 18.

Albion College, one of the top 50 innovative liberal arts colleges in the country, recently announced a series of campus and community investments to accompany two years of substantial growth. The announcements come ahead of a weekend celebrating the inauguration of Dr. Mathew B. Johnson as the 17th president of Albion College.

A new Comprehensive Infrastructure Plan, currently in the final stages of production, will improve the aesthetics and beauty of Albion’s campus and enhance the value proposition the College offers prospective and current students. This includes the multimillion-dollar redevelopment of the Washington Gardner School into the Body and Soul Center, an integrated arts and wellness center for the College and the community.

These investments come alongside the notable improvement of the financial health of the College. Over the past year, the College has grown the endowment to approximately $200 million, adding $40 million year over year. The College has also significantly increased enrollment, having recruited two of the largest classes in the past decade.

“Albion College has experienced two years of strong enrollment growth, made key investments in physical and programmatic infrastructure, and launched bold new initiatives to meet the challenges of today,” said President Johnson. “We are proud to be investing in our people, infrastructure, and community to make Albion a shining light for the future of liberal arts education.”

Earlier this month, Albion was named one of the 50 most innovative liberal arts colleges in the country by U.S. News & World Report for the second year running. Among other national honors, Albion College was included in the newest edition of The Princeton Review’s college guidebook, The Best 387 Colleges, and was named the No. 1 private college in Michigan by Money.com.

The College will recognize these key achievements as part of a weekend of celebrations centered around the inauguration of President Johnson on September 18, 2021. Johnson was appointed to the role by the Albion College Board of Trustees after a four-month-long national search. Johnson, who assumed the presidency on July 1, 2020, did not have a traditional inauguration ceremony at the start of his tenure due to the COVID-19 pandemic.

The inauguration celebration, which will include the dedication of the new School for Public Purpose and Professional Advancement and the groundbreaking of the Body and Soul Center, will give the campus community an opportunity to officially welcome a new chapter of their college’s history.

For more information on Albion’s presidential inauguration celebration and the groundbreaking of the Body and Soul Center, visit albion.edu/inauguration.

Albion College is a private liberal arts college of approximately 1,500 students and is nationally recognized for its academic excellence in the liberal arts tradition, a learning-centered commitment, and a future-oriented perspective. The College is a leader in preparing students to anticipate, solve and prevent problems in order to improve the human and global condition. Albion immerses students in the creation and processing of knowledge and graduates skilled architects of societal change, active citizens, and future leaders. The College is dedicated to the highest quality in undergraduate education and is committed to diversity as a core institutional value.

Albion, Michigan is a culturally diverse community in the south-central part of the state. The College recognizes the value of community, both on- and off-campus, and has invested resources in supporting the revitalization of the greater Albion community. This work offers an increasingly vibrant city around the campus that provides students with a fuller experience as they prepare to become engaged citizens in their own communities. For more information, visit albion.edu.