For Chris Derian, ’17, and Jack Griffin, ’17, a journey of discovery as new adventures await

Chris Derian and Jack Griffin had been planning this for years.

The idea took root on those nights as roommates in the Goodrich Club when they realized that, sooner or later, their days at Albion College would end and, eventually, they’d be staring into the chasm of a new world, a new start, a new career, a new life.

“Neither of us was super excited about jumping into the job market after graduation,” said Derian, a native of Bloomfield Hills who majored in philosophy with a minor in political science.

It was during those campus conversations when the two friends and 2017 graduates thought about combining their love of hiking and adventure and decided that the prospect of hiking the Appalachian Trail—the physically and mentally challenging 2,200-mile trek that stretches from Maine to Georgia—was an appropriate response to relentless adulthood.

“It had always been in my mind since I was 12,” Derian said. “I said to Jack, ‘Why not the Appalachian Trail? And he said, ‘Yeah, why not?’ We talked about it for a year and a half, partially as an escape from jumping into the real world. It was something we thought we should do and ought to do.” 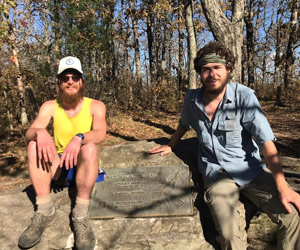 Chris Derian (left) and Jack Griffin, pose at Springer Mountain in Georgia to celebrate their completion of the Appalachian Trail. Barely a month after graduating from Albion College, the two friends began the journey on June 7, 2017 and finished it October 31.

So on June 7, 2017, barely a month after their Commencement ceremony, Griffin and Derian began their quest, climbing to the top of Mount Katahdin in Maine, the northernmost terminus of the daunting trail. They finished on October 31, climbing Springer Mountain in Georgia, completing the journey in 4 1/2 months when the average completion time is five to six months.

“I proved to myself that I’m capable of fantastic things,” said Griffin, a native of Grosse Pointe Farms who majored in English and history with a concentration in creative writing.

The adventure tested them physically and emotionally but also provided opportunities to meet some remarkable people, who all had a story and who all had their “trail names.”

There was the 40-year-old guy from Long Island who quit his job and decided to hike the trail. His trail name? Malink.

There was Pippi, a native of Norway who also decided it was time to set off and hike the trail because, why not?

They met people from everywhere and they all formed a loose confederation whose only goal was to go as far as they could.

As for trail names, Derian earned his by falling in a puddle early on during their trek.

“I was called ‘Puddles’ but I didn’t like it, so I changed it to ‘Ripples,’ after a Grateful Dead song,” he said.

After reading a trail sign aloud in an a dramatic radio voice. Griffin was called, of course, “Voices.”

“Then it became a joke,” Griffin said. “There were two reactions to my nickname: ‘Are you crazy?’ or ‘That’s a cool name.’ It became sort of a social experiment.”

Knowing Each Other Too Well?

The hike was, in many respects, the culmination of a friendship between the two that was forged as first-year students at Albion.

“We became good friends almost immediately,” Derian said. “We shared interests in the same kind of music (especially the Grateful Dead) and literature. And we moved into the Goodrich Club as sophomores and stayed there the last three years.”

And when the time came to embark on the trail, both were ready.

“We had lived together for three years so we were sick of each other before we started,” said Griffin, who hopes to become a professional writer and kept a diary on the hike. “It was good motivation for both of us. We couldn’t let the other finish. We finished despite the other.”

“We got sick of each other,” he said. “We have a similar way of looking at the world so we’d butt heads. But we complemented each other in different ways. I don’t think I could have done it without him.”

And now, nearly a year removed from their accomplishment, each is starting on new adventures.

Derian is setting his sights on law school and Griffin left August 18 for a 27-month stint with the Peace Corps in Kyrgyzstan, a Central Asian country that was once part of the Soviet Union, where he will teach English.

“I don’t necessarily know what I’m getting into,” Griffin said. “But I’m going in with an open mind. I’ve never really gone anywhere outside of the country. But I want to learn and travel and the federal government will pay for it. It just seems like a really good opportunity.”

Upon his return, he hopes to earn a master’s of fine arts degree and get involved in creative writing, language and teaching.

Derian has taken the Law School Admission Test once, and while he scored well on it, he plans to take it again in September so he can seek admission to a law school he has in mind but chooses not to reveal.

“I have high goals for myself,” he said.

Since finishing the Appalachian Trail the two friends haven’t seen much of each other, though they did attend a music concert together a few weeks ago.

“That was our last hurrah,” Derian said. “I didn’t see him for a long stretch, maybe four or five months, and that was the longest we hadn’t seen each other.”

“I won’t be seeing him for a long time now,” Griffin said. “But we’re still close.”

But the impact of the Appalachian Trail experience will stay with both for a long time.

“It offered us a beautiful perspective on life and our place in the world,” Derian said. “It was a life-changing experience.”

For Griffin, that experience will carry over to his new adventure in the Peace Corps.

“It’s something I’ll call upon the rest of my life,” he said. “I know I have the ability to adapt and overcome things. The Trail taught me that.”