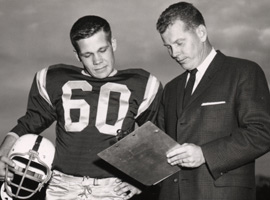 A football coach for nearly half a century, and considered a defensive mastermind in the National Football League, Fritz Shurmur began his professional career in 1954 as a graduate assistant under Albion College Britons coach Morley Fraser. After receiving a master’s degree in education administration at Albion in 1956, Fritz stayed on as a defensive coordinator.

Fritz then coached at the University of Wyoming for 12 years. From there, his career led him to the NFL and included stints with Detroit, New England, Los Angeles, Phoenix and Green Bay. In each of his NFL stops, Shurmur-led defenses ranked at or near the top of the defensive rankings. While at Green Bay, he earned his first Super Bowl ring when the Packers defeated the New England Patriots in 1997. Fritz also was the author of four books on coaching team defense. 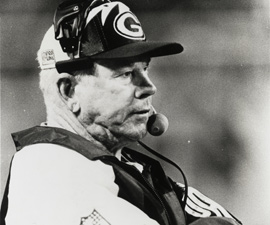 Fritz Shurmur while at Green Bay

Fritz was among the charter members of Albion’s Athletic Hall of Fame in 1989. An All-MIAA performer in both football and baseball, he excelled in football and was captain of the 1953 team, voted the MIAA Most Valuable Player and received Little All-America honors. He was also president of his senior class and a member of Alpha Tau Omega fraternity.

In recognition of his career accomplishments, Fritz received an honorary doctor of pedagogy degree from Albion in 1997.

Fritz joined the Seattle Seahawks as defensive coordinator, while maintaining his residence near Green Bay. He passed away Aug. 30, 1999 and is survived by his wife Peggy, their three children and their families.